Group for all those interested in History of Medicine

Does the Hippocratic Oath Promote Burnout?

Burnout among physicians is rampant. One-third to one-half of practicing physicians meet the criteria for burnout, and in a large study conducted by the Mayo Clinic, 53% of medical students showed…Continue

You probably never thought about reading the works of William Shakespeare for medical advice, but it turns out that the Bard had a keen understanding of the mind-body connection, a study in the…Continue

Would you go to the surgeon in middle ages? 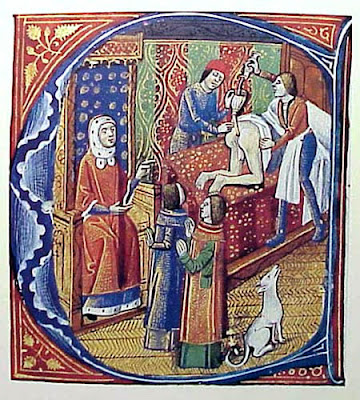 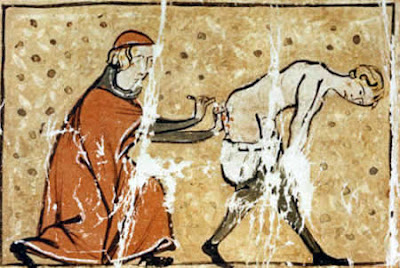 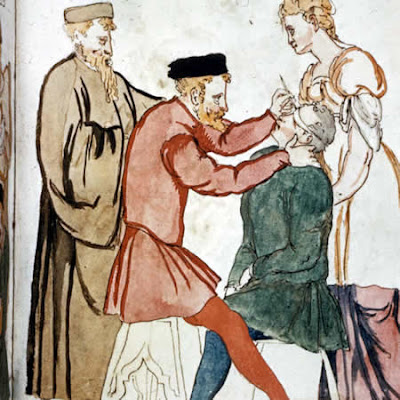 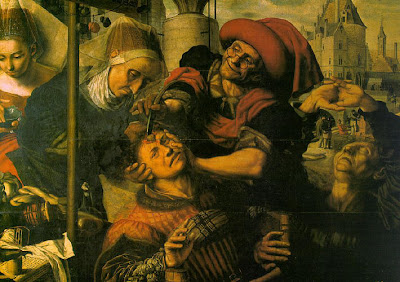 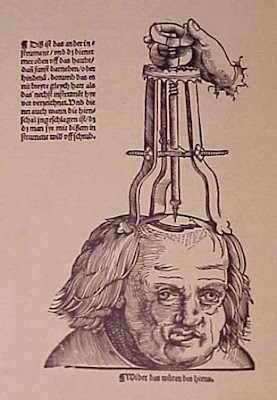 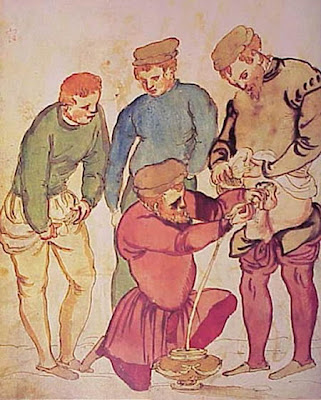 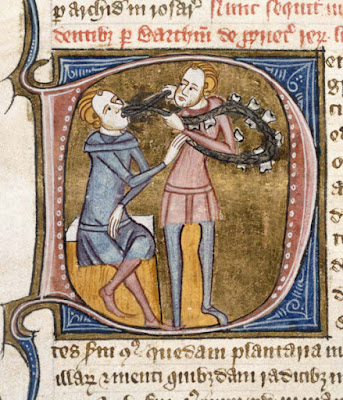 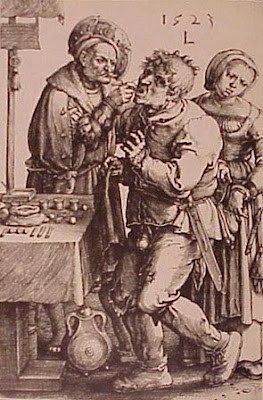 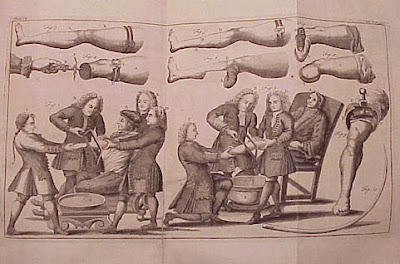 IMAGE CREDIT:
THE ANATOMY LESSON OF DR. NICOLAES TULP BY REMBRANDT, VIA WIKIMEDIA COMMONS
The Renaissance may have been a time of great scientific and artistic innovation, but the era’s medical treatments still had a ways to go before they became safe and effective. Here are a few questionable cures a Renaissance doctor may have prescribed you.

1. TOBACCO USED IN JUST ABOUT EVERY WAY IMAGINABLE

Prior to the arrival of Europeans in the New World, medical uses for smoke were limited to Greek and Eastern traditions involving incense for the treatment of cough and "female diseases."
Once tobacco crossed the pond, European healers found plenty of ways to use the leaf as a compress, mixture ingredient, or inhalant for treating such ailments as cancer, headaches, respiratory problems, stomach cramps, head cold, hypothermia, intestinal worms, and somnolence. For a period, tobacco was seen as a true miracle drug and was even worshipped in healing-based rituals.
Taking cues from a similar Native American tradition, Western healers also made a habit of performing tobacco-smoke enemas for respiratory conditions and in attempts to revive drowning victims. On the smokeless front, doctors preferred liquid tobacco enemas for treating hernias.

2. ENEMAS FOR ALL SEASONS

Smoke was far from the only thing being introduced to Renaissance rectums in the name of good health. As an effective method of getting medicine in the body and targeting intestinal issues, the enema was central to the era’s medical arsenal and was considered appropriate treatment for everything from constipation to cancer.

Emetics were often distributed to induce vomiting as part of illness-specific, or all-around purge processes in Renaissance life, too. An evolving but long-standing belief in the importance of the body’s four humors (blood, yellow bile, black bile, and phlegm) combined with a growing awareness of toxicology, the body’s chemical processes. The Ancient Greek belief in the humors soon fused with the Ayurvedic elemental system to lead healers to encourage bodily cleanses for removing perceived excesses from the body, be they from snakebites and boozing, or supposed planetary-based mineral spikes.

Right up until Europe’s Modern Age and arguably into it, Western medical practitioners could be physicians—many of whom assumed a theoretical, hands-off role—but also surgeons, religious figures, wise women, apothecaries, and barbers. Because they already had the tools required to perform simple surgeries (i.e. straight razors), a barber would often be the go-to option for a person’s local surgical needs. In 1540, British surgeons—skilled tradesmen who were distinct from trained physicians— joined with barbers to form the Company of Barber-Surgeons livery group under Henry VIII, which remained active until 1745.
Barbers would frequently perform cupping therapy, which creates localized suction on the body (thought to induce heightened circulation), bloodletting therapy (for draining excess blood in the case of imbalanced humors), and pulling teeth (if an herbal compress or a flaming twig failed to make the worm—thought to be burrowing in the tooth’s cavity—fall out). These barbers could also, of course, cut hair, give shaves, and perform enemas.

By the middle of the last millennium, Western and Eastern societies were sharing an unprecedented amount of knowledge and culture, and Europe’s Renaissance healers frequently drew on the old, overlapping Christian and Islamic belief that God had endowed the world with cures for human illnesses in the form of plants resembling the body’s respectively ailing parts. The daisy-like Euphrasia flower (or “eyebright”), for example, was used in various concoctions for treating the eyes through the 17th century.
Jakob Böhme's 1621 work The Signature of All Things helped name and spread the popular “doctrine of signatures” that outlined this theory. The English botanist William Cole, among the doctrine’s many supporters, wrote that “the mercy of God... maketh… Herbes for the use of men, and hath… given them particular Signatures, whereby a man may read… the use of them.”

Born Philippus von Hohenheim in 1493, Paracelsus was a highly accomplished Swiss German physician, botanist, and alchemist who, among many other things, founded the field of toxicology and openly challenged many of the still-popular medical principles established by Aristotle and Galen more than 1,000 years earlier. A major proponent of astrology, Paracelsus outlined herbal, mineral, and spiritual treatments designed to maintain harmony between the microcosm (man) and macrocosm (nature), often prescribing different regimens based on the planets’ alignments. He also revised Greek definitions of the roles of the four bodily humors, suggesting that they were just one of the ways that you got sick, and most diseases weren’t caused by internal imbalances.

7. ... AND TREATING EVERYTHING FROM HANGOVERS AND CANCER TO ENVY AND LOUD ROOSTERS

Rhiwallon Feddyg (a.k.a. Rhiwallon of Myddfai) was personal physician to the Welsh lord Rhys Gryg (a.k.a. Rhys the Hoarse/Stammerer). In addition to founding a centuries-long Welsh medical dynasty or "healing cult" with his three sons, he recorded centuries’ worth of know-how from the Physicians of Myddfai in the 1382 manuscript The Red Book of Hergest.
Compiling the collected Welsh medical wisdom, the tome was one of the earliest to offer compiled info on specific illnesses, their treatments, and various anatomical definitions, but also other practical applications of botany. A selection of its suggestions:
DRUNKENNESS. TO REMOVE. If you would remove a man's drunkenness, let him eat bruised saffron with spring water.
HOW TO BE MERRY. If you would be at all times merry, eat saffron in meat or drink, and you will never be sad: but beware of eating over much, lest you should die of excessive joy.
TO SILENCE A COCK. If you should wish that a cock should not crow, anoint his crest with oil, and he will be mute.

Booze was an integral part of Western medicine up through the early 20th century, and it was a popular treatment throughout the Middle Ages for its ability to “preserve the stomach, strengthen the natural heat, help digestion, defend the body from corruption, [and] concoct the food till it be turned into very blood,” according to 13th-century alchemist Roger Bacon.

9. MERCURY AS A SYPHILIS CURE

Paracelsus and his peers were committed to the idea of harmony between man’s microcosm and nature’s macrocosm. They believed that this harmony relied on the interrelationships between the perceived seven planets (interestingly, he considered the Sun and Moon planets, but not Earth), the seven Earth metals, and the seven major human organs. In this system, each of the seven planets had a corresponding metal and organ (example triads being Sun/gold/heart and Jupiter/tin/liver) and allowed healers to prescribe metal-based treatments to target different areas of the body.
The Renaissance also saw the emergence and spread of syphilis throughout the Western world, the treatment for which was—as developed by Paracelsus—ingested or externally applied mercury, leading to a number of poisonings. Still, this would remain the dominant therapy until the early 20th century.

Wasting and wanting not, Renaissance healers put not just any available plants, minerals, and religions to use in their remedies, but all sorts of scraps and waste products from human and animal bodies, too. Human fecal matter was used in variously ingested and externally applied medicines, earwax (mixed with mud) was used for treating migraines, and saliva was applied for skin irritation. Weakened patients drank human blood, which was also available for lepers to soak their limbs.

Meanwhile, the droppings of dogs and crows were prized for treating colic and dysentery, respectively. Pig urine fought fevers, and the roasted flesh of “well nourished kittens” relieved jaundice.

Timeline of History of Medicine

You need to be a member of History of Medicine to add comments!

Point of care testing (POCT) is a new concept in laboratory medicine that is widely used at present. It is the new advent that helps ease medical care in the present day. The knowledge on the POCT medicine is very important and necessary for the general practitioner. In this specific book, the author summarizes, presents and discusses on the concept of POCT, its importance and examples of important POCT tools.
eBook: http://amzn.com/B005BYPGJK
paperback: http://amzn.com/1466256958