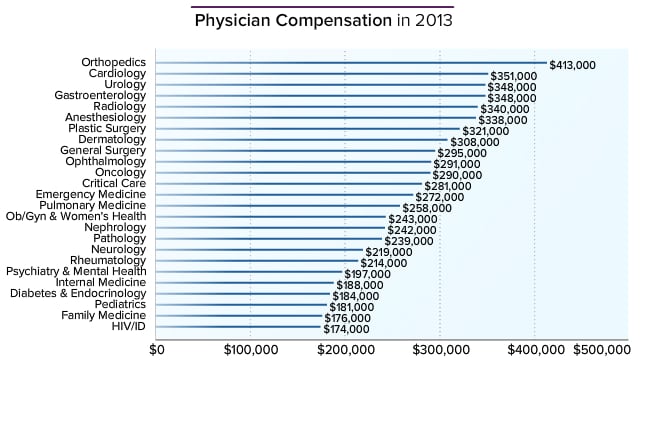 In an explanation of their findings, Medscape notes that: “As in the past, those who perform procedures have the highest incomes compared with those who manage chronic illnesses.” Some primary care practices saw a slight increase in earnings, “which could reflect early changes in reimbursement resulting from the Affordable Care Act.”

Earnings also vary by region. Average physician income ranges from $US239,000 in the Northeast to $US258,000 in the Great Lakes area. Certain regions of the country may have to pay more to attract doctors, so physician salaries often reflect the level of competition more than the cost of living. Doctors in rural areas actually tend to earn more.

The Medscape survey also found that doctors are about evenly split on whether they think they are compensated fairly, though that varies somewhat by specialty. Dermatologists were the most likely to say their compensation was fair; plastic surgeons were the least likely.

That suggests that the demands and joys of the job shape how much compensation seems “fair” more than just the salary itself.

Overall, just 10% of all surveyed doctors said “making good money” was the most rewarding part of the job.